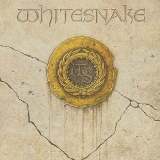 After a long absence...
I went to work while hearing "Whitesnake" of "Whitesnake".
It is an album of 1987 called popular name "Serpens Albus".
"Whitesnake" was already popular in their own country U.K. and Japan,
but, they came to be finally recognized in the United States by this album.
On the contrary,
They are the last British rock band which stood in the U.S. top?

"Serpens Albus" is the album of the typical metal vocalist.
"David Coverdale" use up a voice as a musical instrument like an opera singer.
Breathing is used as sound effects in the part without the lyrics.
It is not by the vocalism that only chases a melody.
I challenged it several times at karaoke,
but it is absolutely impossible that an amateur imitates it !